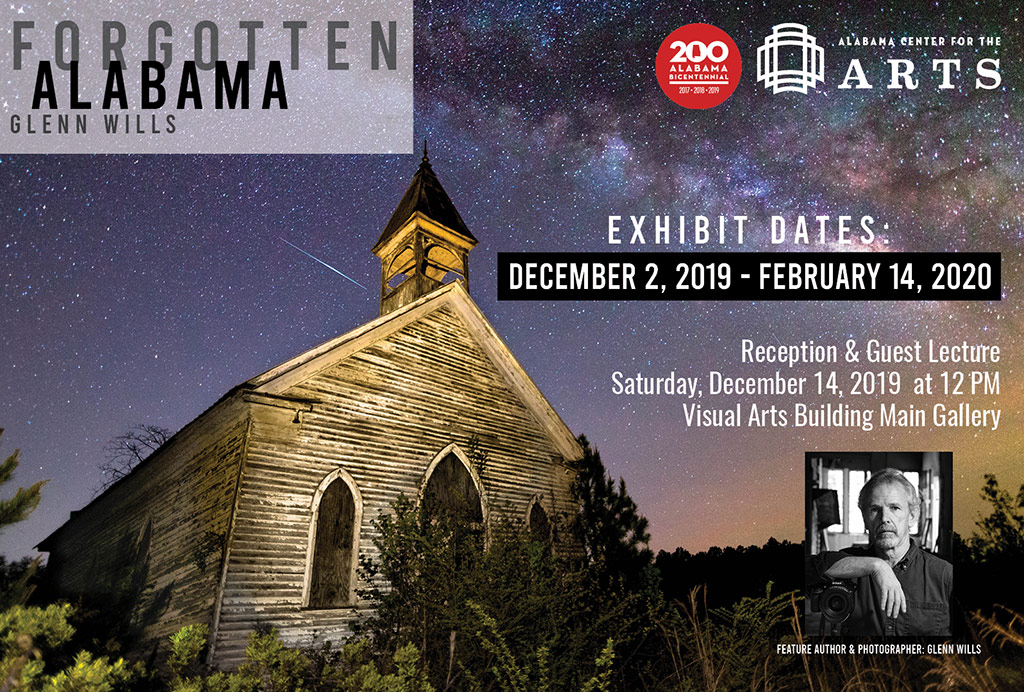 The Alabama Center for the Arts is pleased to announce the opening of “Forgotten Alabama” in the Main Gallery on Monday, December 2, featuring photography by Glenn Wills. Wills, a self-proclaimed explorer, photographer, author, and preserver of history, made it his mission to capture thousands of images of neglected places in Alabama before they disappear. He grew up in Huntsville and worked for WAAY-TV, WHNT-TV, and WVTM-TV before he retired. The exhibit will be Wills’ first ever gallery show and is an Alabama Bicentennial Endorsed Event.

Wills discovered his love for old photos in the 1970s while working for a chimney sweep. The gentleman he worked for owned an old Victorian home in Huntsville whose interior walls were lined with dozens of black and white photographs that were 40 – 50 years old. Fascinated by the photos, Wills decided that he too would like to preserve the history of Alabama through his own photography one day.

While traveling for work in 2007, Wills noticed an old car along the highway and discovered that car was part of a junkyard full of classic automobiles, slowly rusting away. Wills did not have a camera with him that day, but he never traveled without one again. What began as a hobby – taking photographs of forgotten relics of Alabama’s past – transitioned into a full time endeavor after Wills retired.

“Forgotten Alabama” will be on display until Friday, February 14, 2020. A reception and guest lecture by Glenn Wills will be held on Saturday, December 14 at 12:00 pm in the Alabama Center for the Arts’ Visual Arts Building. The reception will coincide with a 200th birthday celebration for the state of Alabama. Event details to be released soon. The exhibit and reception are both free and open to the public.

The Alabama Center for the Arts is the region’s premier art center and degree program. The project continues a long-standing collaborative academic effort between Athens State University and Calhoun Community College and serves as a model of academic institutional cooperation for the state. The Alabama Center for the Arts is a venue for cultural events and activities and will enhance an appreciation of art while promoting opportunities for creative expression for residents throughout the region.

Athens State University was founded in 1822, making it the oldest continuously-operated institute of higher learning in the state of Alabama. Offering over 50 undergraduate majors and degree options in addition to graduate programs, Athens State focuses on providing affordable, flexible, and high-quality options for all learners.