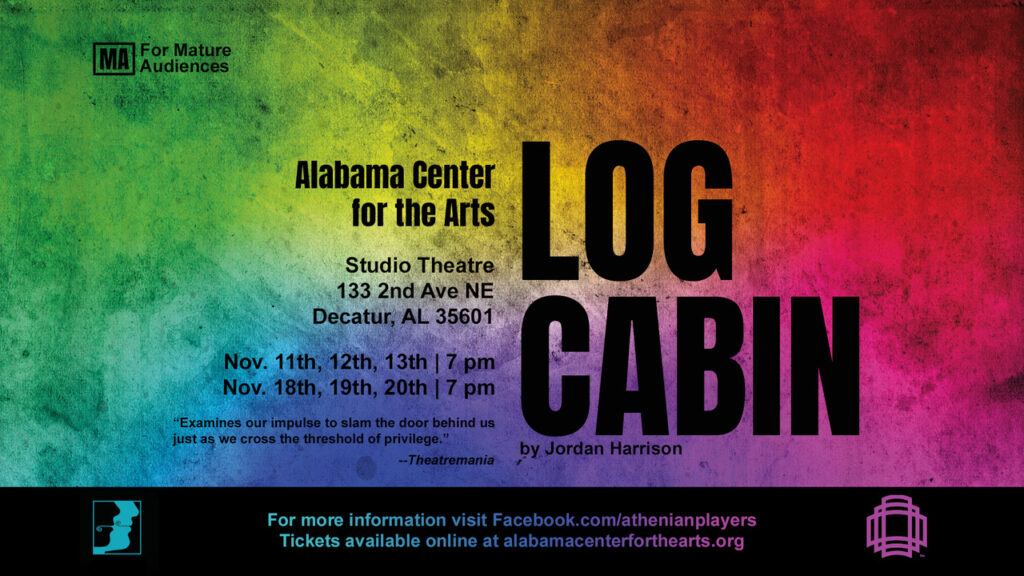 The Athenian Players to present Log Cabin by Jordan Harrison

The Athenian Players invite you to join them for their Fall 2021 performance of Log Cabin by Jordan Harrison. Described by TheatreMania as an examination of “our impulse to slam the door behind us just as we cross the threshold of privilege,” Log Cabin presents two upper-class married couples, one gay and one lesbian, struggling to understand the continued legislative and social issues endured by their trans male friend. While set in a familiar domestic situation of living room conversations between friends over drinks and cheese trays, Log Cabin presents that even “liberal minded progressives” still harbor some conservative thought that prevents them from recognizing their own cultural privilege. Dr. Hugh K. Long, Associate Professor of Drama & English at Athens State University notes, “This is truly a play about friends, trying to discover what identity, marriage, parenthood, and progress means in the 21st Century Digital Age.”

Directed by Dr. Hugh K. Long, Log Cabin will run from November 11-13 and November 18-20. All performances will take place at 7pm in the Studio Theatre of the Performing Arts Center at the Alabama Center for the Arts, 133 Second Avenue NE, Decatur, AL. General Admission tickets are $15, and Students/Seniors/Faculty/Staff are $10. Audience members are encouraged to wear masks in accordance to CDC Guidance and to practice socially distanced seating in the Studio Theatre

This production is rated Theatre-MA for Mature Language and Adult Themes. Audience discretion is advised

It’s a faraway age of hope and inclusivity; in other words, it’s 2015. When a tight-knit group of married gays and lesbians – comfy in the new mainstream – see themselves through the eyes of their rakish transgender pal, it’s clear that the march toward progress is anything but unified. With stinging satire and acute compassion, Jordan Harrison’s pointed comedy charts the breakdown of empathy that happens when we think our rights are secure, revealing conservative hearts where you’d least expect.​