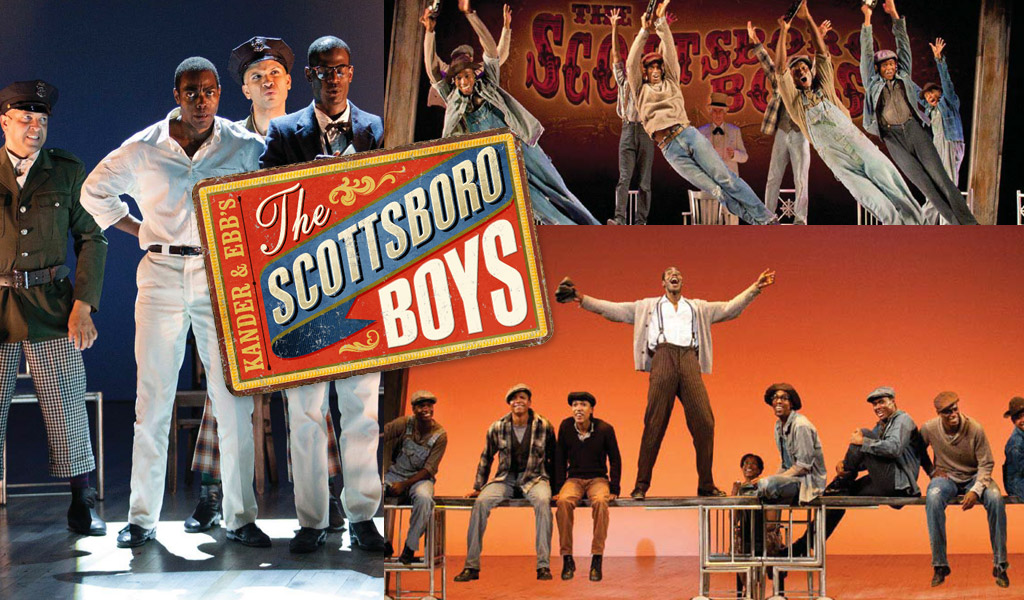 The Alabama Center for the Arts (ACA), Calhoun Community College, Athens State University, Red Mountain Theatre Company (RMTC) and The Princess Theatre will host a press event on Thursday, January 24, 2019, 3:30 pm at The Princess Theatre to announce details for the Alabama premier of the Tony nominated musical “The Scottsboro Boys”.

Celebrated and award-winning theatrical luminaries John Kander, Susan Stroman, David Thompson, and Broadway/London producer Catherine Schreiber will be in Decatur for the historical announcement of the Alabama premiere of “The Scottsboro Boys”. Music and lyrics are by the legendary duo John Kander and Fred Ebb who created Cabaret and Chicago. The Book is by David Thompson. Susan Stroman directs. On Broadway, the show was nominated for a staggering 12 Tony Awards. In London, it won The Critics’ Circle’ Award, The Evening Standard Award and it was nominated for 6 Oliviers.

The production tells the true story of nine young black men between the ages of 12 and 19, traveling by train through Scottsboro, Alabama, in 1931 in search of a new life. By the end of their journey, the youth find themselves wrongly accused of a horrific crime which leaves their lives changed forever. The subsequent trial and national press surrounding it had a powerful and everlasting impact on American history and the American Civil Rights Movement. The trial also led to the passage of two pivotal Supreme Court rulings, including the right to proper legal representation and the right to trial by a jury on one’s peers.

According to Philip Mann, Producer of the “Scottsboro Boys” and director of Promotion and Economic Development for the Alabama Center for the Arts (ACA), “The show will be a recreation of the original Broadway production with this celebrated creative and producing team overseeing their work in Alabama,” commented Mann. “It is not an overstatement to say that this is a watershed event in the cultural life of Decatur and the State of Alabama. Further, this is an initial step towards our eventual goal of establishing the Alabama Center for the Arts as a leader in the cultural and educational life of the region.”

“The arts, especially the Theatre, are a perfect means to inspire conversation and transform communities.  RMTC is proud to bring this project to fruition and is dedicated to Birmingham and its place as the epicenter of the Human Rights movement.” (Keith Cromwell, Executive Director, Red Mountain Theatre Company).

“From an instructional perspective, we are thrilled at the opportunity seeing this production will afford our students,” said Dr. Donna Estill, Calhoun’s Dean for Humanities and Social Science. “Being able to experience a part of our state’s history from this perspective will be invaluable to our students,” added Estill.

Dr. Stephen Spencer, dean of the College of Arts and Sciences at Athens State, commented, “This is an important story in the history of Alabama, and the performance offers many opportunities for students studying history, social studies, law, criminal justice, music, and drama, from elementary schools to college, to connect what they are doing in the classroom to a dynamic Broadway production. This musical will enrich their education by bringing alive a historical event and moment.”

The Alabama premier is set to take place in the winter of 2020, and will be produced by Philip Mann for the ACA / The Princess Theater, Red Mountain Theatre Company in Birmingham (Keith Cromwell, Executive Director) and Broadway producer Catherine Schreiber. Performance dates and ticketing information will be released in the spring of 2019.

For more information, contact Philip Mann at philip.mann@calhoun.edu or the Calhoun Office of Institutional Advancement at (256) 306-2561.